An EFI App a bit rusty

This is a new version of an old article of mine on Medium. This version no longer uses XBuild since cargo nightly is receiving build-std that does the same job.

After two tweets that I made last week, playing around with UEFI and Rust, some people asked to publish a blog post explaining how to create a UEFI application fully written in Rust and demonstrate all the testing environment.

So todays objective it’s to create a UEFI application in Rust that prints out the memory map filtered by usable memory (described as conventional memory by the UEFI specification). But before putting the hands at work let’s review some concepts first.

When the computer turns on the hardware is on an unpredictable state and some initialization must be made in order to prepare the system to work as intended. Introduced around 1975, BIOS, an acronym for Basic Input/Output System, was been used since then was a way to perform hardware initialization during booting process (power-on startup) and to provide runtime services for operating system and program. However, BIOS has some limitations and after more than 40 years at the service, is being replaced by the Unified Extensible Firmware Interface (or UEFI for short), UEFI aims to address its technical shortcomings.

UEFI is a specification that defines a software interface between an operating system/UEFI application and platform firmware. Intel developed the original Extensible Firmware Interface (EFI) which the development was ceased in July 2005 and Apple was one of the early adopters with their first Intel Macintosh early 2006. In the same year, 2005, UEFI deprecated EFI 1.10 (the final release of EFI). The Unified EFI Forum is the industry body that manages the UEFI Specification. The interface defined by the EFI Specification includes data tables that contains platform information, boot and runtime services that are available to the OS loader/application. This firmware provides several technical advantages over a traditional BIOS system:

As is possible to see UEFI is more modern and future-proof solution compared with BIOS, also provides more advanced features to easily implement a bootloader or a UEFI application without the need to have advanced architecture knowledge.

Was said on the beginning Rust will be used to write the UEFI application previous spoken. For those who don’t know what Rust is, Rust is a systems programming language sponsored by Mozilla which describes it as a “safe, concurrent, practical language” supporting functional and imperative-procedural paradigms. Rust is very similar to C++ syntactically speaking, but its designers intend it to provide better memory safety while still maintaining performance.

The language resulted from a personal project of a Mozilla employ, Graydon Hoare. Mozilla started to fund the project in 2009, after realizing the potential of it. Only in 2010 was made a public announcement of the project, in the same year that the compiler, originally written in OCaml, is started to be rewritten in Rust, using LLVM as backend.

The first pre-alpha version of the compiler appends in January of 2012, but just 3 years later, on May 15th of 2015 is launched the first stable version (now known as 2015 edition). Rust is an open community project, that means that everyone can contribute on the development and on the language refinement and that can be done in many ways, for example, improve documentation, reporting bugs, propose RFCs to add features or contribute with code. The language received a huge feedback from the experience of developing the Servo engine, a modern browser engine with extreme performance for applications and embedded use. Noways, Rust starts to be present in all kind of areas, like satellite control software, micro-controller programming, web servers, on Firefox and so on. Rust won first place for “most loved programming language” in the Stack Overflow Developer Survey in 2016, 2017 and 2018.

Just more 2 or 3 things before start

In order to write a bootloader, hypervisor or a low-level application it’s required to use a system programming language. There is a great article that discusses in detail what that concept is. But generically speaking, a system programming language is a language that allows fine control over the execution of the code in the machine, with the possibility of manipulating all individual bytes in the computer’s memory, and with Rust it’s possible to do that.

Furthermore, to avoid the need to describe all UEFI tables the uefi-rs crate will be used. This crate makes it easy to write UEFI applications in Rust. The objective of uefi-rs is to provide safe and performant wrappers for UEFI interfaces and allow developers to write idiomatic Rust code.

Finally, for the test environment will be used Python and QEMU alongside with OVMF. QEMU is a well-known full-system emulator that allows run code for any machine, on any supported architecture. OVMF is an EDK II based project to enable UEFI support for Virtual Machines (QEMU and KVM). QEMU doesn’t come with OVMF, so it requires to installing it on your PC or get a pre-built image from the Internet, it’s possible to download it from my test repository.

With no further delays, let’s get the work done! First thing, create a new folder and start a rust project in it.

Now it’s time to add uefi-rs as a dependency. To do that just add the following dependency to your Cargo.toml:

Now, when the cargo run command is executed, Cargo will build all uefi-rs alongside with our application.

The next step is creating a target configuration file and a python script to help build and run the UEFI application. Basically, a target configuration describes the output binary, “endianess”, architecture, binary organization and features to use during compilation. This file will be used by build-std, a cargo feature to produce a cross-compiled core crate (the dependency-free foundation of the Rust Standard Library with no system libraries and no libc).

So firstly, we need to tell cargo to enable build-std by creating a new file inside .cargo/config:

Note: to this to work you need to have installed the rust nightly as well as the rust-src component, you can use rustup to do that: rustup component add rust-src --toolchain nightly

When building using Cargo’s build-std feature, the mem feature of compiler-builtins does not automatically get enabled. Therefore, we have to manually add support for the memory functions by adding the following to Cargo.toml file:

And then add the crate as an dependency so the mem* functions are linked in:

Then, we create a file named x86_64-none-efi.json with the following content:

A UEFI executable is nothing more than a PE binary format used by Windows, but with a specific subsystem and without a symbol table, for that, the target-family is set as being windows.

Now, a build.py file must be created by implementing two commands:

Note: For some reason, I didn’t find any information on why the executable doesn’t load automatically with this OVMF version, so the startup.nsh script is used to make the boot less painful.

The first step is making the application boot and enter in an infinite loop, to prevent it to exit into the firmware. In Rust, errors can be promoted into a panic or abort. A panic happens when something goes wrong but the whole can continue running (this usually happens with threads), an abort happens when the program goes into an unrecoverable state and aborts. The existence of a panic handler is mandatory, it is implemented on the standard library, but since the application doesn’t depend on an operating system the std lib can’t be used. Instead, we will use the core library, this one doesn’t contain a panic handler implementation, so one must be made by us. Luckily, uefi-rs already implement one, so no needs to do it ourselves, however, it could be an empty function.

If you noticed, on the target config file it’s specified to pass a couple of parameters to the lld (LLVM linker) indicating the entry point (uefi_start) and the subsystem. So, the next spec is importing the uefi-rs crate and define a function named uefi_start with an infinite loop and check if it runs.

The main.rs file should be edited to have the following content:

The first two lines indicated that out crate doesn’t have a main function and won’t use the std lib, also, the entry point is marked by using the entry attribute.

Finally, after building and running the application, QEMU will show something similar to the image below: 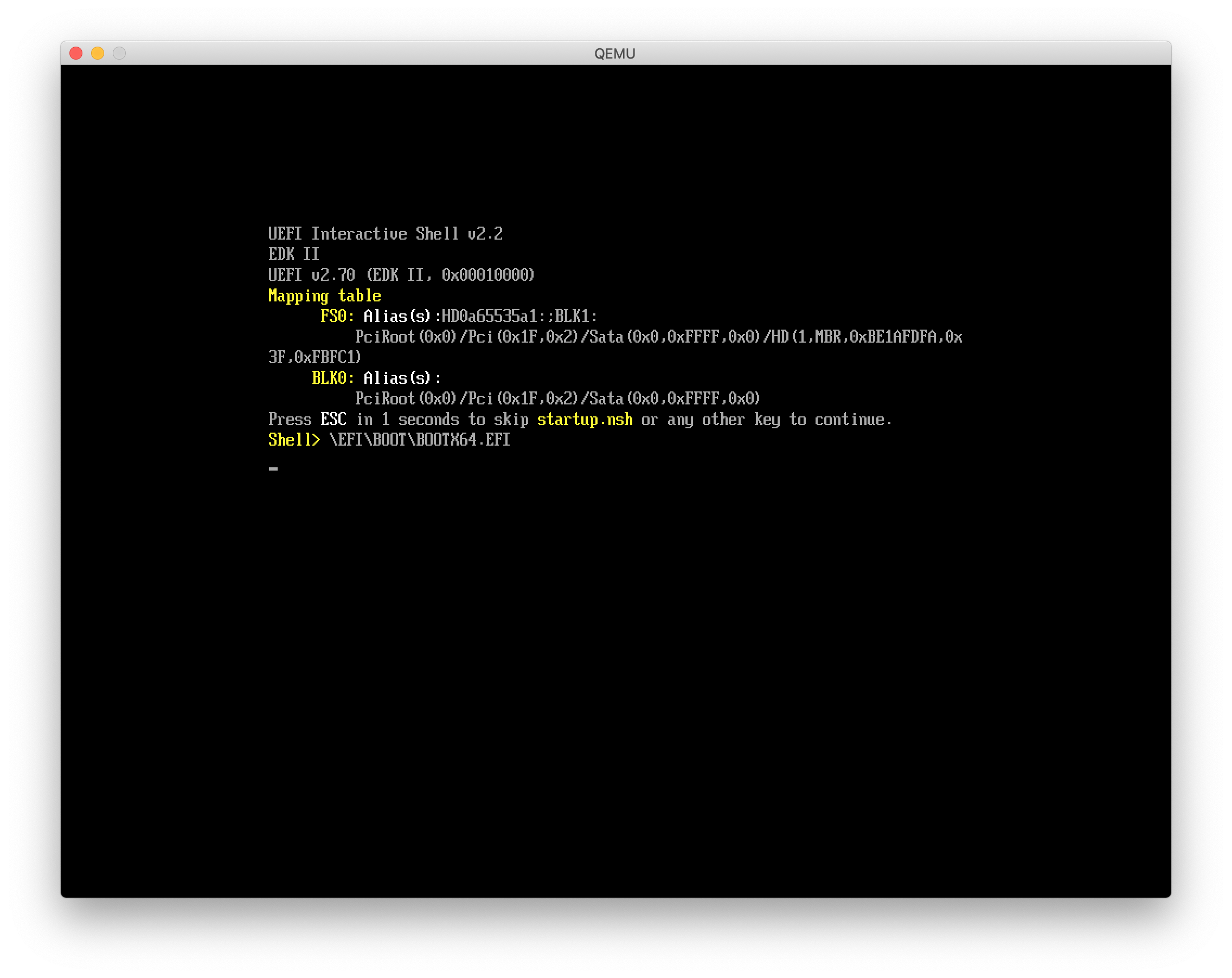 Nothing too interesting here, but since QEMU doesn’t enter in a boot loop or jump into the EFI shell it confirms that our application is being called. The next step is printing the UEFI version on the screen. Once again, rust-rs already implement helper functions to deal with that, so is just initialize the logging system and use the info! macro to print out the text to screen and serial port too.

A new dependency needs to be added to Cargo.toml to access that info! macro:

Then you just need to add the following code to the uefi_start function, before the infinity loop statement:

After build and running it, it will log something like INFO: UEFI 2.70, this value depends on the version of the firmware that you are running on.

To finalize let’s write a function that receives a reference for the Boot Services table and prints out the free usable memory regions. Firstly we need to include the alloc crate to have access to the Vec structure, for that, these three lines must be added to the begging of the file:

After that, we define a constant with the size of each EFI page, wish is 4KB regardless of the system.

And then we finalize with the functions responsible for walking through the memory map searching for conventional memory and print the free ranges on the screen:

The end result must be very similar to the following screenshot: 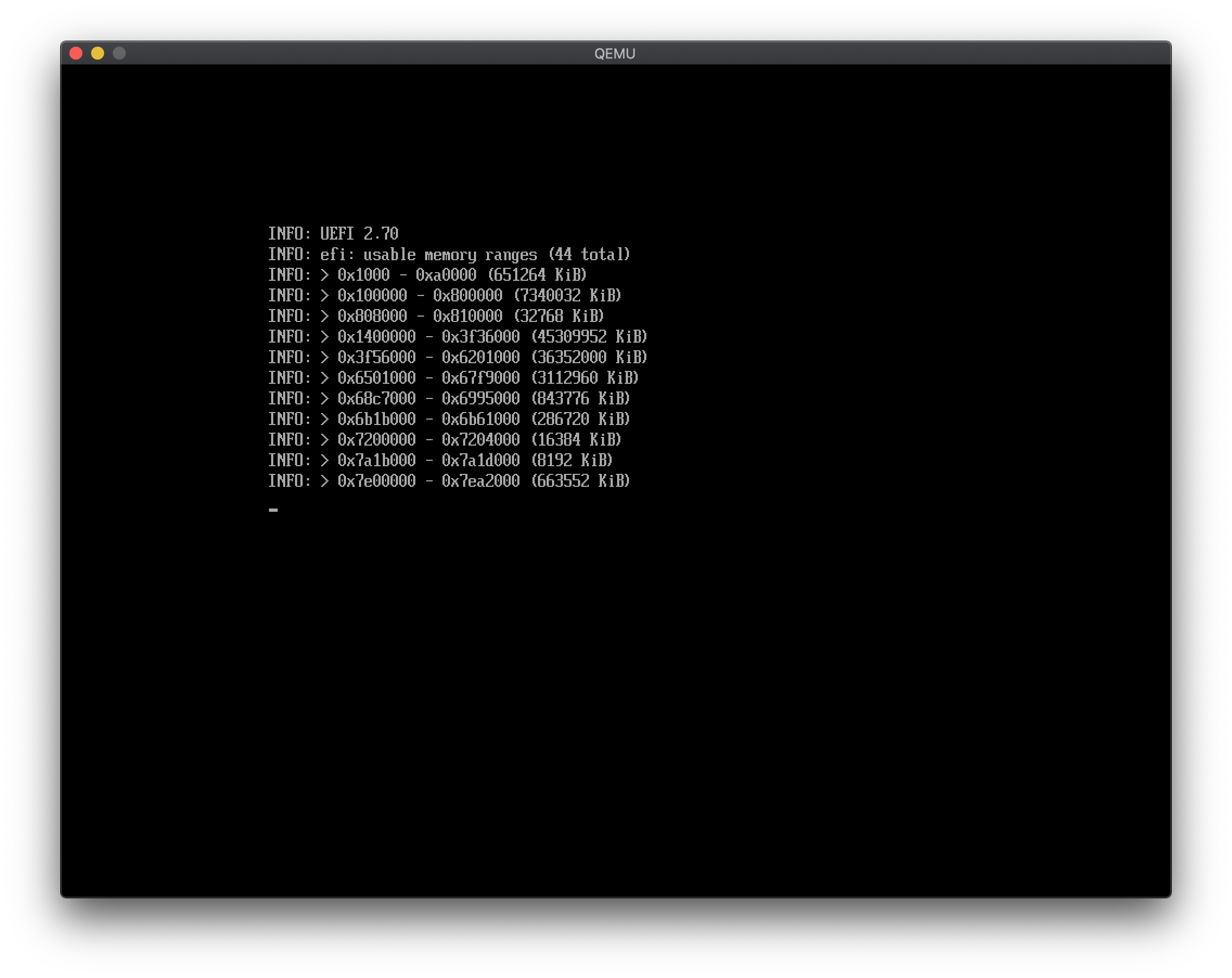 And its done, not so hard right? 💪 Now is up to you continuing to implement new features to the application and maybe ending up writing a bootloader or a more complex UEFI application.

Just one important note if you are adventurous enough. If you end up writing your own Operating System or learn a bit more about the way that things work you should put the APIs that UEFI offers to interact with the filesystem, networking, and accessing PCI devices, etc, apart and write your own drivers.

Don’t get lazy for having all these abstractions exposed to you. 😜